You are here: Home / Healing / Two Newbies Walk into the ER… 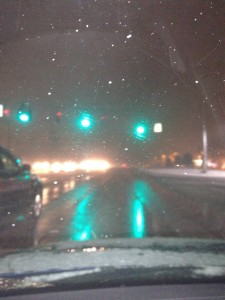 There are times in everyone’s life where suddenly, seemingly out of nowhere a brick hits them on the side of the head and sends their head into a perpetual 360 degree circle. Spinning round and round and round. That exact thing, sans brick and true 360 degree rotation, happened to me the night I first brought my son to the emergency room because he felt he was psychologically unbalanced and in need of medical support.

I had been to the emergency room a few times with my children during the years, mostly for falls, sports injuries and one nasty dog bite, but none of this prepared me for what I was about to experience as we went through check-in with the triage nurse. After the basic set of pre-admission questions, we waited to be seen by a Doctor. When we were called, however, we were met first by a security guard who took all of my son’s personal effects, including his shoes, and scanned him with a handheld metal detector. From there we were escorted to the locked down Psychiatric Emergency Department area of the hospital, also known as CPEP or Comprehensive Psychiatric Emergency Program.

Having had some emergency room experience, I figured that we had several hours ahead of us and was glad I had the foresight to bring a cellphone charger and a notebook (a tool which would prove to be invaluable during the entire process). What I didn’t realize is that I should have brought comfy footwear, snacks, a blanket, and a book or two. The irony is that in the scheme of things, we really weren’t there very long (this visit), in part because my son did not get admitted and perhaps in part because it was nearly Christmas. The bottom line is that we were in CPEP for a little more than 7 hours. The surprise was that we did not speak with a single staff member (except to ask for aforementioned blankets, socks, and snacks) for almost 5 hours, AND there weren’t more than two other patients waiting to be seen. This was our shortest stay in CPEP, our longest was 27 hours.

What I learned very quickly was that I needed to write down everything (see invaluable notebook comment above). After sitting in the ER, in the middle of the night (for us, these visits always originated late at night) it became increasingly difficult to keep track of who we met with, what their title was and what we discussed. I also found it very helpful to mark down the time of each conversation, since time becomes fuzzy when pulling an all nighter. I have used this notebook for every conversation from that day forward and if I find myself on the phone without the notebook, I will still take notes and then literally staple the notes into the notebook so that all of the information stays together and in one place.

This notebook became even more important as we moved from department to department within the hospital. Even with all of the technology that exists, information does not move between departments. In any given CPEP visit I could fill out the same 20 plus pages of paperwork, with the same information (who remembers their dentist’s name and number at 4:00 am anyway?) anywhere from 3-5 times, if not more. I found the notebook proved useful in communicating and verifying what had been previously discussed with the medical staff as we met with different staff members as well. Seems as though their process for communication between treatment staff members rank right up there with their ability to have one set of forms that follow a patient from department to department.

I used the experience of these trips to CPEP to develop a support process for myself that helped ensure prior care details were effectively communicated, that the information was readily available and that during those long hours we had some basic comforts and necessities and I hope that this information can prove useful for others as well. There is not always time to prepare prior to an emergency room visit, hence the word emergency, however if your situation is escalating, it’s best to be as prepared as possible. Starting a notebook, to document day to day happenings, medications, escalated situations or medical/therapy information as well as any other support interactions can be helpful regardless of whether or not a hospital visit become necessary. Additionally, creating a one page notebook entry or list of all care providers, insurance information, emergency contacts and information about key development milestones on your child/loved ones early childhood will make filling out the reams of forms and paperwork far less stressful.

Until the next blog post, thank you all again for your support, your stories and your feedback! Please email at farfromparadiseblog@gmail.com with any questions regarding this information or any other mental health system question/inquiry.