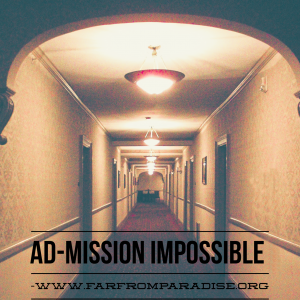 An armed security guard was our escort to the ward. As I followed my son and the guard, it was obvious that the path they chose to walk took us through the deepest bowels of the hospital. At one point it felt as though we had stepped back in time, as we walked through a section of the hospital that felt long forgotten and had clearly missed a number of opportunities for upgrade and refurbishment. There was a connection I had to this place. I felt the lonely, long forgotten halls of the hospital were a metaphor for how I was feeling going through these series of events.

We had just spent 20 hours in CPEP (CPEP) our second visit in three weeks. My son wasn’t feeling safe and felt he needed to be hospitalized. The hospital personnel agreed that admission was appropriate. I had no idea what to expect, in fact my son had more information as he had friends who had previously been hospitalized. I filled out the third full set of admission paperwork (later I learned that there is admission paperwork for ER, for CPEP, for transfer to psych, and for admission to psych) and then transport had taken him to the adolescent psych ward or as they referred to it as 4-9000. (floor/ward)

Upon arrival to the ward, I was taken into a “Family” room and presented with another full set of paperwork. It was then that I realized that none of the paperwork travels from department to department. This was very frustrating, especially given the fact that the information now existed in several different places within the hospital. After adding a sleepless night plus stress of the situation, I was in no place to fill the forms out again. This is when I began to keep separate notes of the information that the hospital requests, especially my son’s developmental information. Having a list of developmental milestones pulled together ahead of time will make the paperwork part of this process a little easier. Most of this information can be obtained from the primary care doctor. Having some of this information prepared ahead of time will definitely eliminate some of the stress of the situation.

After the paperwork was complete, the nurse told me I could go home. That’s it. Leave my son to settle in. My head was spinning…. What now? What next? That’s it, just leave? I couldn’t believe that there was no process or information of what would occur next. At the time, I didn’t know what questions to ask. It felt so confusing. There was such a numbness that all of a sudden came on, a true feeling of disbelief.

Honestly, I was in disbelief around the whole situation. I kept wondering how this had happened, what I had missed. How it had gotten so escalated so quickly. Less than a month before had been my son’s birthday. I had taken him to get his driver’s permit and out to lunch and we had some great laughs and things had felt good, hopeful. Now here I was walking out of the hospital, out of the adolescent psych ward. My head was spinning. I had no idea what to expect, what was next…. I was heartbroken.

And so began our journey into the Mental Health system…

Thank you all for your support, your stories and your feedback! Please email at farfromparadiseblog@gmail.com with any questions regarding this information or any other mental health system question/inquiry.