You are here: Home / Advocacy / Guest Post: No More Excuses 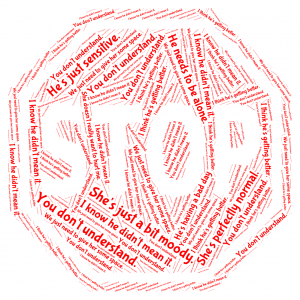 Sometime in my twenties as a young mother and new teacher, I heard the saying: “Excuses are like belly buttons, everybody’s got one…” I believe the rest of the saying was “…and they’re all full of crud” or something like that. But for my purposes as both a teacher and a mom, I didn’t need that last part. No, for me, the message in the saying gets it right when you hear that “everybody’s got one” part. I can’t begin to guess how many times I’ve used this for my students and my own sons. I wanted them to see that making excuses doesn’t solve problems, it only creates more of them.

I wish as the mother of a son with bipolar disorder, I’d taken my own advice.

When my teenage son Jake first presented signs of his illness, I tried to explain his symptoms away. Yes, I made excuses, lots of them. And even when my younger son Luke came to me with his concerns, I’d try to excuse Jake’s inexcusable behavior somehow. Oh, the irony. “Excuses are like belly buttons…”

It’s been years since my son Jake, now 23, was first presenting bipolar symptoms. Recently, I’ve written a semi-autobiographical novel based loosely on those turbulent years in our household. The story is told primarily in the point of view of the younger brother, Dylan.

In “A Brother’s Oath,” one of the first times the older brother, Dane, exhibits bipolar-like volatility, his younger brother Dylan is the only witness. In short, Dylan bears the brunt of Dane’s impulsive, hostile behavior in the form of a missile-like attack of several household items fired straight at Dylan’s head while their mother isn’t home.

While this particular event is fictionalized, the message is not. As a mom, it was much easier to make excuses than to face the hard truth that my child might be mentally ill. And even when my instincts told me otherwise, there were plenty of times I ignored my own advice about belly buttons and excuses.

Here is an excerpt from “A Brother’s Oath”:

The next morning, a Saturday, I came downstairs and found Mom sitting in the kitchen with her coffee. She wasn’t reading the paper like she usually did. Instead, she just sort of stared out the window.

“Morning,” I said as I pulled open the pantry door, perusing the cereal choices.

I poured my Cocoa Puffs and milk into a bowl and joined her at the table. “So what’s up?” I said hesitantly.

She turned to me smiling. “Not much. What do you have planned for the day?”

“Well, I was hoping I could hang out with Tyler later. Can he come over?”

“I think it would probably be better if you went to Tyler’s house, Dilly. I think your brother really needs some space…He’s… He’s really…” and she couldn’t find the words.

“Would you watch your language, please, Dylan?”

“He used me for target practice last night, Mom!”

“So he had some kind of… episode. I’m sure he’s only worried about his injured knee. It wasn’t personal. I’m sorry if he hurt you, Dilly, I really am, but we have to take care of him now. He needs us.”

He needs us. I couldn’t believe what I was hearing. “Come on, Mom. Can’t I have a friend over? Please? We won’t get in anyone’s way, especially his.”

Then she slurped down the last drink of her coffee before stating matter-of-factly, “No. Not this time. You’ll just need to go over to Tyler’s house.” And she got up, put her coffee cup in the sink, and left the room. Just like that. Case closed.

As a caregiver, it isn’t always easy to face difficult truths. We deny things. We excuse things. We may even ignore them completely. But eventually, the facts rise to the surface and we must accept them.

Maybe the next time you are tempted to excuse the behavior of a mentally ill loved one in your care, you can remember the belly button saying instead: “Excuses are like belly buttons and everybody’s got one.”

So, don’t make any more excuses. Instead, make commitments: 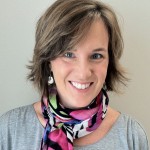