You are here: Home / Advocacy / The Fear Factor 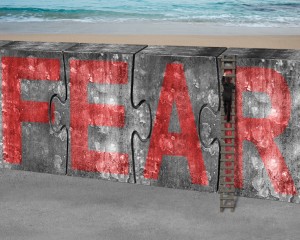 Often when we think about fear, we associate it with things that we are unable or are afraid to do. Fear is a powerful emotion. Its internal alarm system in our bodies is useful because it lets us know when we are in danger, giving us the opportunity to make different choices in order to avoid harm or worse, death.

Fear can also be a learned or conditioned response. We may have learned to be fearful of dogs, heights, or clowns, for example, because we were taught by someone, whom we looked up to, that we should be afraid of those things because they were afraid. Conditioned fear is usually more subtle. Often this occurs when we, as young children, observe our parents or other grown ups feelings about things such as money or safety. In this case, the fear ends up being passed along to us without ever being told to be afraid. Have you ever wondered where some of your fears are rooted?

There is a whole other side of fear though that we don’t often talk about. This is the feeling of fear that motivates and keeps us moving forward with things that may push our comfort zone. When my son went into his health crisis, I experienced significant amounts of fear. At first, the fear was paralyzing. I felt like it was hard to breathe and think, let alone make the multiple daily decisions that were necessary for his care. Fear is definitely a scary aspect when it comes to caring for a loved one in crisis. I was afraid of losing my son, afraid of what was going to happen next and overwhelmed with the fear of the unknown. As my son’s condition progressively escalated, I realized that allowing fear to paralyze me was not in my son’s best interest. It was then that I recognized I needed to find a way to address my fear so it did not unintentionally stop me from seeking the care and services that he needed.

This was really a big thing for me because it meant that I needed to acknowledge some fears that had been stopping me from moving forward in my life for a very long time. There was a fear I had about speaking up and asking for what I needed. There was fear of questioning those in positions of authority, in the case of my son’s crisis that meant the Doctors and treatment team members attending to his care. There was also the fear of people judging me as a bad mother or bad person. I knew that these fears not only needed to be acknowledged but also addressed, if I was going to be able to stay present and focused on my son’s needs. I knew that fear wasn’t just going to go away because I chose to recognize it; I needed to face it and make some decisions around how to change my belief around the fear.

At the time, losing my son to suicide, intentional or accidental, was the biggest fear that I had. It far outweighed the other internal fears that were showing up for me at that time. This fear was my motivator to face and move through, or at least act regardless of, all the fear that had reared its head for me at this time.

I could not, I would not allow my internal stories and conditioned fears to get in the way of my son’s care and my son’s life. So I chose to act, even when it felt uncomfortable, even when it felt impossible, even while I waited and watched as my world crumbled down around me. And you know it did crumble down around me, and as my son went deeper into his crisis, it crumbled again and again. Most of the time my voice shook when I stepped outside my comfort zone and spoke my truth, asked for what I needed and chose to disregard the judgment and stigma I felt all around me.

My son’s life was too important and my fear’s were old and outdated. I couldn’t imagine allowing something like old fear stories to get in the way of his care. So instead I allowed the fear to motivate me. I allowed the fear to sit next to me but not be my navigator. In a way, I even welcomed fear to be present and participate in the care of my son by keeping me on my toes and ever aware and present for what he needed and how he needed it, no matter what.

What fears are you allowing to block your path, your next steps, your ability to be present for the people who you love most in your life? This is not an easy question. In fact, it’s often quite difficult to look deeply within ourselves and identify the blocks; however, to truly thrive in your life you will need to be able to take a look at the parts of you that may not be so shiny and clean.

And while it may not be easy, I can tell you that it is worth it. We are here to thrive in our lives, not to be bound by old and outdated fear. If I can make the shift, so can you!